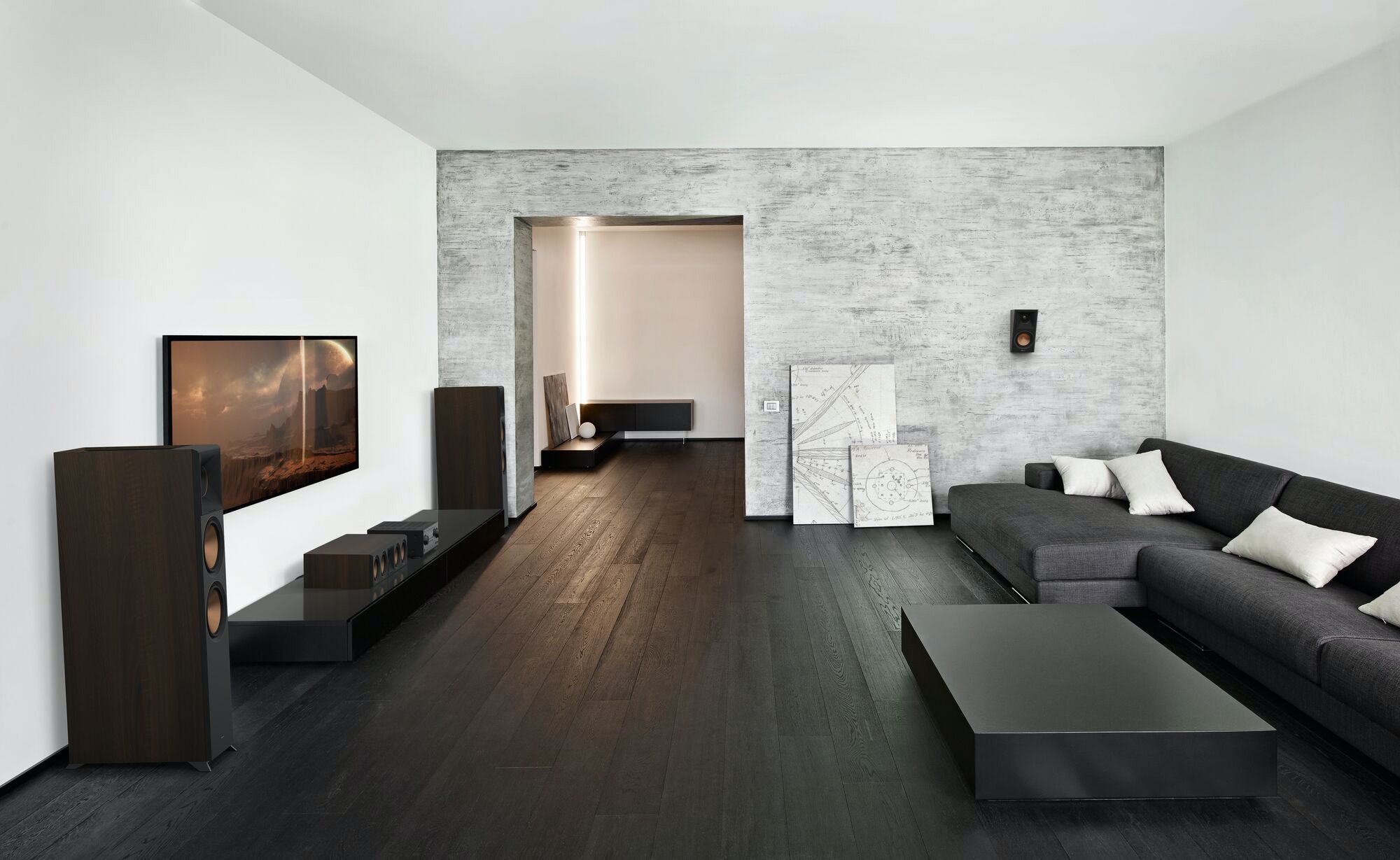 What Are the Best Speakers for Home Theater?

“You Wanted the Best, You Got the Best,” is a legendary live album from KISS. Oftentimes, this particular recording comes to mind when talking about Klipsch in terms of having some of the best home theater speakers on the market. Sure, lots of people will tell you they have the “best speakers,” but do they really? Do they actually have carefully-engineered, innovative, groundbreaking tech and more than 75 years experience in creating the best speakers to back those claims up?

You may be curious about how to “get the best speakers” for your home theater. How to bring the movie theater home perhaps.

We’re here to give you a step-by-step guide to getting and setting up the top home theater speakers so you can listen to whatever your version of “You Wanted the Best, You Got the Best” is at maximum volume with crystal clarity at home.

What You Need for the Best Home Theater:

A question we get routinely is, “where do I start?” Well, it depends on a few things: the size of your space, your budget, and what your ultimate goals are for your home theater system.

It could be as simple as wanting better sound from what your TV’s built-in speakers can deliver. Even high-end 4K TVs need a little help in the sound department. Or, you may be longing for a mammoth Dolby Atmos immersive setup designed to make you feel like you’re in the movie or TV show or in the recording studio with your favorite artist. You may want to ditch your barre de son and add stéréo hi-fi speakers and an AV Receiver. You may want a giant home theater spread to ensure you own your online jeux opponents with ease and gusto.

Ultimately, you just want something better than what you have currently. So, we’ll build the blocks of a home theater together and provide some inspiration.

Learn How To Build the Best Home Theater System>

There are several schools of thought on how to go about this. You have to think about the size of the room and location. When we say location, we mean do you live in a house or an apartment? Houses generally offer more options for a larger system, particularly with Klipsch home theater speakers and subwoofers. If you live in an apartment, it’s not particularly neighborly to get a mammoth caisson de basses and shake the floors. While we do position ourselves as “pissing off the neighbors,” there are limits.

In that case, the best home theater speaker system for you might be either a sound bar and caisson de basses setup or a pair of bookshelf speakers or powered monitors. You still get thundering sound with all of the options listed above, but there’s less of a chance of your neighbors filing a noise complaint against you while you watch the latest season of “Better Call Saul.”

But, if space is no object, then your options for best-in-class home theater become wide open, with the only limits being your budget and possibly your imagination.

In this section, we'll run down how you can build your own home theater system piece by piece and what you'll need to truly make it next-level.

Floorstanding speakers, sometimes called tower speakers, are the largest type of standard speakers people put in their home theater systems, aside from custom building an actual home theater with widescreens. They’re typically at least three to four feet tall with a footprint of at least one square foot, although they can be much larger. They contain several drivers, which produce sound through vibration, to allow for a wide range of sound. How many and what type of drivers vary from model to model. The human ear can perceive sounds ranging from 20 to 20 000 Hz. A driver’s size depends partly on what its range is. Higher ranges have shorter soundwaves, so their drivers can be smaller. Conversely, lower frequencies have longer soundwaves, requiring larger drivers. The different types of drivers are:

Klipsch acousticians spend YEARS researching and tweaking these critical parts of our floorstanding speakers, spending literally thousands of hours listening and observing how the speakers perform before they’re ready for the public at large.

“There’s a bathroom on the right,” is one of the most misheard lyrics of all time. But, we all know that’s not what Creedence Clearwater Revival were singing about in “Bad Moon Rising.”

Misheard lyrics or dialogue is a very common issue. Closed-captioning is a definite help, but mishearing the words can really change the way you experience music and movies or flat-out ruin the plot without social media spoilers. A center channel speaker is the best solution to hearing the words to whatever you love with crystal-clear precision.

“In-home theater, the center channel is dedicated to dialogue,” says Vice President of Global Brand and Business Development Mark Casavant. “On-screen dialogue and on-screen effects come from right in the middle of the soundscape. The center channel is where the action is.”

Bookshelf speakers are also often used as starters for a home theater system. Depending on the size of your space and budget, you may opt to have bookshelf speakers in lieu of floor standing speakers for true stéréo audio. Klipsch bookshelf speakers are outfitted with the same legendary pavillon-loaded technology our tower speakers have, which makes them a great option for the left and right channels if space is your top concern.

Conversely, they make a great addition to an already-existing system if you want to go from a 2,1 home theater to a 5,1 surround sound setup.

HOW TO FIND THE BEST BOOKSHELF SPEAKERS>

Recently, I decided to rewatch Marvel’s “Black Widow” again using the Klipsch Cinema 600 Sound Bar. In full transparency, the Cinema 600 has the largest caisson de basses I’ve ever owned. I was prepared to feel the thunder of the action sequences.

I was not prepared for the shaking to scare my dogs.

A caisson de basses provides an extra layer of sound to your home theater, in the form of low frequencies around 20-200 Hz that a traditional two-channel or surround sound setup can’t reproduce without help. These low frequencies come from instruments such as the kick drum, basses guitar, and pipe organ, as well as movie sound effects like explosions or footsteps from a dinosaur.

The sub can be placed in several different locations in the room, depending on where the rest of your system is set up.

GET THE THREE BEST SPOTS TO PLACE YOUR SUB>

As common as it is to think about the woofer size you want, the sub being down-firing or front-firing is also something people need to keep top of mind as they shop.

Subwoofers are built in one of two ways: some subs are down-firing, which means the sound is directed out of the bottom of the speaker, while front-firing units project the sound out of one side. According to “The Home Theater DIY,” “down-firing subwoofers are intended to be close to the listening area, not part of your TV console.” Placement is a big factor when choosing between down-firing or front-firing subwoofers. For example, you wouldn’t want a caisson de basses pounding sound into a floor if someone lives below you. Pissing off your neighbors is one thing - making their lives a living hell is quite another. If you live in an apartment or condo, a front-firing sub is a better fit in the literal sense.

LEARN MORE ABOUT WHY YOU NEED A SUBWOOFER>

HOW TO SET UP YOUR HOME THEATER SPEAKERS:

One important note: most Klipsch speakers come with just a power cord, with the exception of the new Reference R-40SA and new Reference Premiere RP-500SA II Dolby Atmos speakers.

The packaging includes two small banana cables to connect the top unit to the tower (floor standing) speakers. This was not included in the previous models since this was a recent design update in both the Reference and Reference Premiere series.

With that caveat, you will need to purchase speaker wire. Follow these simple tips while you shop:

In the final analysis, much like premium speakers, high-end cables generally are made with better materials. You will need something that not only offers a seamless connection but is long enough to traverse your room from the AV Receiver.

DO I NEED AN AV RECEIVER?

In most cases, you will need to snare a high-quality AV Receiver to bring all the pieces together to deliver stunning visuals and sound. Your speaker set-up will plug into the receiver and sync up the frequencies, including what you see and hear simultaneously. It is also recommended for Smart Home audio system setups, where you have the option of streaming a movie in one room for the adults and something else for the kids in a separate room.

Onkyo AV Receivers also have the distinction of being Klipsch Optimized, meaning receivers created 2021 and beyond feature presets to ensure your new Klipsch speakers sound their absolute best.

“To simplify setup, Klipsch and Onkyo teamed up to implement the precise crossover values for specific new Reference Premiere speakers,” says Onkyo Senior Product Manager Rolf Hawkins. In simpler terms, your Onkyo AV Receiver is all ready to work in sync with your Klipsch Reference Premiere II speakers and can be set up using your AVR remote.

There really is no wrong answer when it comes to the best home theater system for you. Ultimately, it’s a matter of what you hope to get out of making upgrades. As we said earlier, anything you add will improve the sound quality of your TV’s speakers immediately.